We use functional cookies and anonymized analytics cookies. We don't use tracking cookies. Ok?
ACCEPT
OUR COOKIE POLICY
your potential plus
our commitment
changes lives
WE SUPPORT
WHO WE SUPPORT
OUR APPROACH
LEARNING DISABILITY
AUTISM SPECTRUM
MENTAL HEALTH & WELLBEING
ACQUIRED BRAIN INJURY
HOW WE CHANGE LIVES
SERVICES
OUR SERVICES
SUPPORTED LIVING
RESIDENTIAL ADULTS
OUTREACH & HOME SUPPORT
DAY SERVICES
SPECIALIST EDUCATION SERVICES
FIND A SERVICE
GET IN TOUCH
HOW TO CONTACT US
MAKE A REFERRAL
HOW ARE WE DOING
WORK FOR US
WORKING WITH US
SEARCH FOR A JOB
TRAINING & DEVELOPMENT
STAFF STORIES
ABOUT US
WHO ARE WE?
WHY CHOOSE US?
MISSION & VALUES
OUR TEAM
COMMITMENT TO QUALITY
NEWS
GET TO KNOW US
USEFUL LINKS
CONTACT US
MAKE A REFERRAL
COVID-19 UPDATE
NEWS
National Care Group News
BACK TO NEWS FEED
Be patient, be persistent and book your flu jab early

This year, more than ever, the need to get a flu jab is critical and will, according to government advice, help to stop the Coronavirus pandemic spreading further.

As the National Care Group Exec Team joined the growing number of other colleagues in getting their jabs organised; some found it more difficult than others. Despite trying to make an appointment, our Group Finance Director, David Rowe Bewick, was unable to make an appointment due to shortages and a lack of availability of the vaccine.

David Rowe Bewick also commented,“I called my GP to book an appointment only to be told that I could not get a date for a jab until mid-November. I understand from colleagues around the country that this can be the initial feedback. I also tried my local pharmacy and they too had none in stock and I could not make an appointment just yet. I will keep contacting my GP and will search out other pharmacists as I wanted not only to show my commitment to this important initiative but also to keep myself well over the winter”

Other members of the Exec Team have had more success as you can see from their pictures. 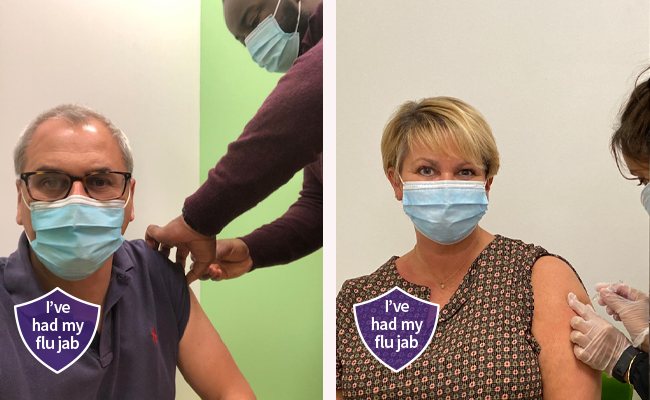 James Allen said, “Can’t quite believe that I am saying I was lucky to get a jab but given others experiences, I think I was! It didn’t hurt at all and I would urge everyone not to be put off if at first, it is difficult to get an appointment – this is important to keep everyone well over the winter months”

Karen Lewis said,“Like Mike Cleasby, I turned up for my appointment only to be told that they had run out of the jab. Luckily I was quickly able to rebook in my area and got it done. I suppose given the huge demand patience is going to be key in getting this done over the coming months but I do want to see as many of our colleagues either in the frontline or support functions getting the jab – it is vital” 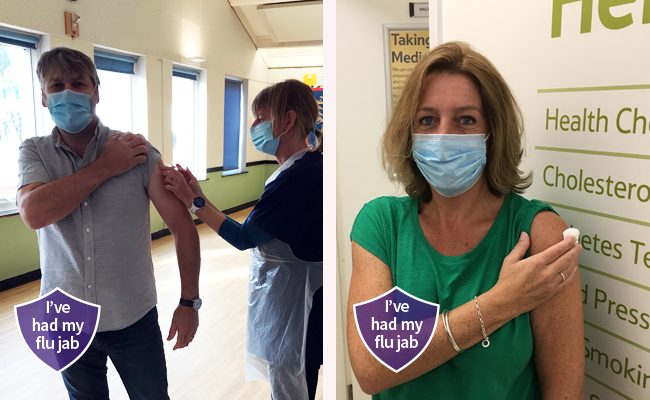 Mike Ranson said, “I was quick off the mark and got mine done pretty early this year. I hope others can follow suit and get quick access to the jab in all parts of the country like I did”

Jo Brewin said, “Although I have only been here a short while I wanted to show my commitment and belief to this really important initiative being actively supported by National Care Group this year. We are seeing increasing numbers of colleagues testing positive for COVID in some services and I believe that we must take this seriously. Getting a flu jab is essential” 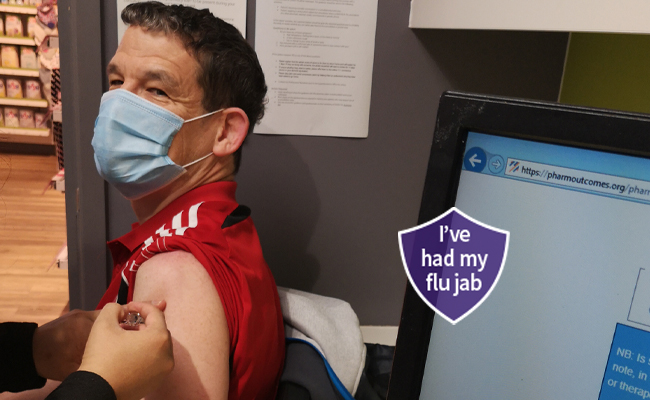 Mike Cleasby said, “It was frustrating as I arrived for my jab only to be told they had run out of supply and that I needed to come back. I was a bit annoyed, to be honest, but I persevered and was able to get my flu jab the following week. It is great to have the members of the Exec Team leading by example in this campaign as we believe that getting the flu jab is very important, especially during COVID.”

Getting a flu jab is really important but as the experience of the Exec Team has shown, we know that in some areas it is difficult to get done. We would urge everyone to:

Make arrangements to get it done early • be patient • be persistent • and it doesn't hurt • stay safe!