We use functional cookies and anonymized analytics cookies. We don't use tracking cookies. Ok?
ACCEPT
OUR COOKIE POLICY
your potential plus
our commitment
changes lives
WE SUPPORT
WHO WE SUPPORT
OUR APPROACH
LEARNING DISABILITY
AUTISM SPECTRUM
MENTAL HEALTH & WELLBEING
ACQUIRED BRAIN INJURY
HOW WE CHANGE LIVES
SERVICES
OUR SERVICES
SUPPORTED LIVING
RESIDENTIAL SERVICES
NATIONAL NEUROLOGICAL SERVICES
OUTREACH & HOME SUPPORT
DAY SERVICES
SPECIALIST EDUCATION SERVICES
FIND A SERVICE
GET IN TOUCH
HOW TO CONTACT US
MAKE A REFERRAL
HOW ARE WE DOING?
WORK FOR US
WORKING WITH US
SEARCH FOR A JOB
TRAINING & DEVELOPMENT
COLLEAGUE STORIES
ABOUT US
WHO ARE WE?
WHY CHOOSE US?
MISSION & VALUES
OUR TEAM
COMMITMENT TO QUALITY
NEWS
GET TO KNOW US
USEFUL LINKS
CONTACT US
MAKE A REFERRAL
COVID-19 UPDATE
SIGN ME UP
NEWS
National Care Group News
BACK TO NEWS FEED
Introducing Feb's Outstanding Achievement Winners
Well done to Chosen Care Podsmead Road and Integra's Maes Hafan Teams!

Two members of our Executive Team have been on the road to surprise and congratulate the joint winners of our Outstanding Achievement Award for February 2022.

Both worthy winners were nominated for their outstanding support and progress for people we support at their services.

Photographed above are the Chosen Care Podsmead Road Supported Living Team with Kathy Howitt, their Registered Manager. They were nominated by Kathy for achieving major progress with a person we support. Going above and beyond their roles to unlock their full potential resulting in meaningful and rewarding employment for the individual. Presented with their award by our Chief Executive, James Allen - who you can just see at the back of the photo! 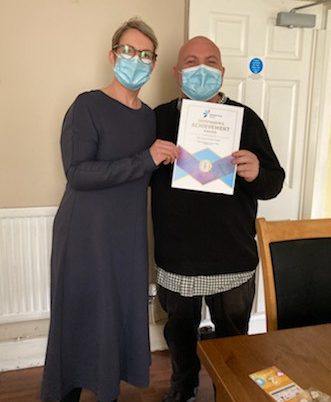 Caught on camera above is Paul Curbishley with Claire Leake, our People Director, receiving the outstanding achievement award on behalf of the Maes Hafan Team. Paul put the team forward for the award in recognition of their major progress with a person they support, especially through some particularly challenging times.

Recognition must also go to the seven other teams and colleagues who were nominated during February. Here's a special shout out to them all:

The Edge End Lane Team from Affinity Supporting People were nominated by Stacey Barker for their outstanding hard work, dedication and passion during a long period of change.

Kirsten McNab from Affinity Supporting People - South, was nominated by Matt Green for being a brilliant, team leader, support worker and colleague. Always going above and beyond her role for the people she supports.

Dale Morrey from Shelton's Cauldon Place was nominated by Kelly Charles for being dedicated to and achieving major progress for a new person they support at Flat 3.

June Huntley from Highlea Care was put forward by Regional Director Charlotte Lumley for her outstanding support and implementation of a new plan at Rosglen.

David Ferrol, Chris Thorburn and people we support - Barry, Percy, Tom, Colin, Lee and Reece from Highlea Care were all put forward by their Registered Manager Julie Cowens for their super star performances in their new set of recruitment films to be used across National Care Group to inspire new colleagues to join the business.

The Networks Team from Shelton Care were nominated by Donna Walklet for working collaboratively to resolve a potential crisis situation for a person they support and their family - going above and beyond their roles.

Well done to all our outstanding colleagues!