We use functional cookies and anonymized analytics cookies. We don't use tracking cookies. Ok?
ACCEPT
OUR COOKIE POLICY
your potential plus
our commitment
changes lives
WE SUPPORT
WHO WE SUPPORT
OUR APPROACH
LEARNING DISABILITY
AUTISM SPECTRUM
MENTAL HEALTH & WELLBEING
ACQUIRED BRAIN INJURY
HOW WE CHANGE LIVES
SERVICES
OUR SERVICES
SUPPORTED LIVING
RESIDENTIAL ADULTS
NATIONAL NEUROLOGICAL SERVICES
OUTREACH & HOME SUPPORT
DAY SERVICES
SPECIALIST EDUCATION SERVICES
FIND A SERVICE
GET IN TOUCH
HOW TO CONTACT US
MAKE A REFERRAL
HOW ARE WE DOING?
WORK FOR US
WORKING WITH US
SEARCH FOR A JOB
TRAINING & DEVELOPMENT
COLLEAGUE STORIES
ABOUT US
WHO ARE WE?
WHY CHOOSE US?
MISSION & VALUES
OUR TEAM
COMMITMENT TO QUALITY
NEWS
GET TO KNOW US
USEFUL LINKS
CONTACT US
MAKE A REFERRAL
COVID-19 UPDATE
SIGN ME UP
NEWS
National Care Group News
BACK TO NEWS FEED
Enrico's Story - life after acquired brain injury
Enrico, person we support at National Care Group's Ashbrook neurological rehabilitation centre, talks to us about his experience of life after brain injury 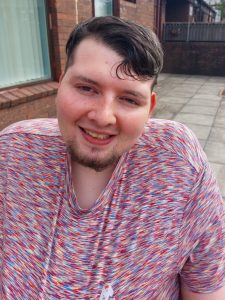 Enrico is 25 years old and on the 21 March 2020 he had a serious motor bike accident, crashing into a brick wall. As a result, he has a brain injury and has experienced some huge changes to his life.

Emergency services were called to the accident, and he was taken to Salford Royal Infirmary where he remained in a coma for three months. He had to have a tracheostomy which stayed in place for a further two months after awakening from the coma plus a PEG feed and catheter. He couldn’t walk or use his left arm and had to have metal plates in his right wrist and hand.

In September 2020 he was transferred to Trafford general hospital to undergo a period of rehabilitation, before moving on to Ashbrook Neuro Rehab in April 2021. When he arrived at Ashbrook he still couldn’t walk, transfer, or use his left hand, although was able to eat and drink without the Peg Feed.

At Ashbrook he worked hard with his physio, OT and SALT to meet his goal of walking again and regaining his independence. He’ll soon be moving on to a more independent place, but doesn’t really want to leave Ashbrook!

Enrico initially found losing his independence very distressing, often getting upset. However he found a way to cope and manage his emotions through writing poems and stories about the accident. One day he’d like to write a book about his experience to help others in the same situation. Now full of motivation, he can walk with a frame and can pivot transfer without mobility aids. He can use his left arm and grip but can’t fully extend it yet. He’s also supported to go out for a meal with friends each week, achieving more steps towards independence every day.

“I woke up from my coma, I’m now alive and can’t believe I survived. Hit the wall headfirst hence my brain injury. Do need to go to church because God’s looking over me already. God’s plan needs a few fans. Feels like I got hit over the head with a pan. Got a friend called Dan and a friend called Frank. We are going back to when I survived, I have got a lot of pride even though I have cried. I have been through a lot, I have come a long way, I wake up with motivation every day. Coz now I’m walking and talking.”

Everyone at National Care Group is proud of Enrico and his strong determination to gain independence. The team have worked really hard to support him at every stage.