We use functional cookies and anonymized analytics cookies. We don't use tracking cookies. Ok?
ACCEPT
OUR COOKIE POLICY
your potential plus
our commitment
changes lives
WE SUPPORT
WHO WE SUPPORT
OUR APPROACH
LEARNING DISABILITY
AUTISM SPECTRUM
MENTAL HEALTH & WELLBEING
ACQUIRED BRAIN INJURY
HOW WE CHANGE LIVES
SERVICES
OUR SERVICES
SUPPORTED LIVING
RESIDENTIAL ADULTS
NATIONAL NEUROLOGICAL SERVICES
OUTREACH & HOME SUPPORT
DAY SERVICES
SPECIALIST EDUCATION SERVICES
FIND A SERVICE
GET IN TOUCH
HOW TO CONTACT US
MAKE A REFERRAL
HOW ARE WE DOING?
WORK FOR US
WORKING WITH US
SEARCH FOR A JOB
TRAINING & DEVELOPMENT
COLLEAGUE STORIES
ABOUT US
WHO ARE WE?
WHY CHOOSE US?
MISSION & VALUES
OUR TEAM
COMMITMENT TO QUALITY
NEWS
GET TO KNOW US
USEFUL LINKS
CONTACT US
MAKE A REFERRAL
COVID-19 UPDATE
SIGN ME UP
NEWS
National Care Group News
BACK TO NEWS FEED
August's Outstanding Achievement Award Winner!
Coral Upton is our August Outstanding Achievement Award Winner! 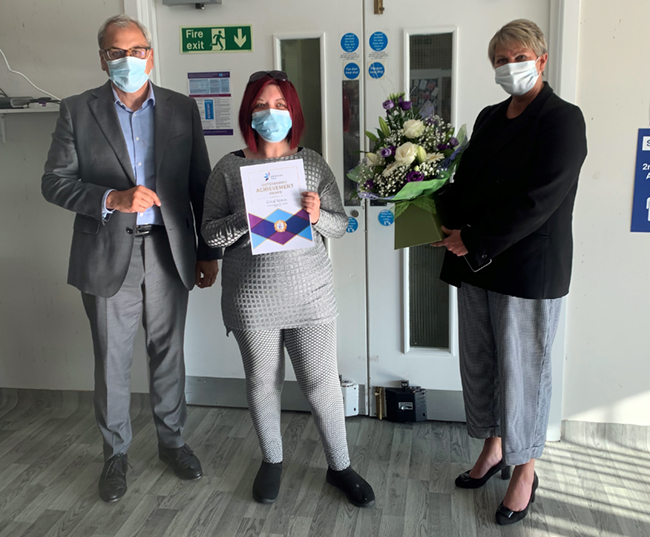 Each month National Care Group colleagues nominate each other for outstanding performance, highlighting just some of the incredible work achieved around the business.

During August the Executive Team received six nominations, all worthy contenders for the honour and shining examples of demonstrating National Care Group company values of respect, collaboration, empowerment and passion.

Coral from our Ashbrook neurological service was nominated by manager Kath Cox for achieving 100% attendance during the pandemic, enabling them not to use agencies and providing consistency for the people we support. Also for being so hardworking, brilliant and dedicated to what she does and a general pleasure to work with. She's a huge support to others, frequently covering night shifts at short notice,'buddying' new night colleagues and empowering the team to take on the role of rehab coaches.

Other brilliant nominations received this month were: